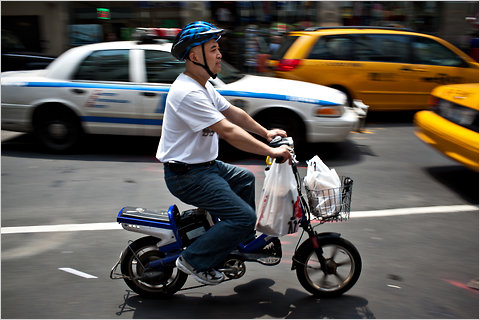 Watch out New Yorkers- all e-bikes could soon be legal! A new bill is proposing that the city remove a ban on handlebar activated e-bikes that have long been holding back delivery drivers who rely on them for business. However, some New Yorkers are fearful for the negative impacts these bikes would have on pedestrian safety and the chance that injuries and fatalities could rise.

What To Know About The Bill

This past April, Mayor de Blasio passed legislation legalizing e-bikes in New York City that were pedal-assist only. E-bikes operated by a throttle on the handlebar remained illegal to use under the law, posing fines up to $500 per ticket, as well as confiscation of the e-bikes if found on the streets. These types of bikes were seen as too dangerous to operate, particularly on roads and sidewalks as busy as New York City where hundreds of thousands of pedestrians are out and about on any given day.

The new bill, however, proposed by Council Member Rafael Espinal, looks to include the hand-operated e-scooters as a legal method of transportation in NYC. Espinal, along with other delivery worker advocates, believes there is a double standard when it comes to e-bikes. Pedal-assisted e-bikes are expensive, allowing larger companies to profit over small delivery services who can only afford e-bikes operated by hand throttles. The new legislation supports the use of these throttle e-bikes, as well as e-scooters, to even the playing field for all delivery services and avoid the sometimes devastating consequences when they face violations.

Safety Concerns About The Bill

Critics of e-bikes are still concerned with the danger and chaos e-bikes alone could pose on pedestrian travel, particularly throttle e-bikes. As a part of the Vision Zero initiative, the NYPD has been relentlessly confiscating illegal e-bikes on the streets in the last few years and issuing hefty fines to discourage the use of these bikes in the city. Unlike pedal operated e-bikes, hand throttle bikes are susceptible to accidents caused by malfunctions and misuse unique to these devices. Some examples of these are:

Compared to a pedal-assist e-bike, which is designed to mimic and enhance the action a rider is taking when they begin to pedal, throttle e-bikes do not require any action except engaging the throttle. These bikes are capable of throwing riders off, jumpstarting too quickly, and getting stuck at excessive speeds. On an open road, the outcome of such an accident may only be minor. But surrounded by buses, cars, bikes, pedestrians, and other various activities going on in NYC every day, a wide throttle bike could lead to catastrophic and life-threatening injuries.

Regardless of whether Espinal’s legislation passes, e-bikes are the future. To compete with other countries and major cities, New York City will have to adjust their streets, sidewalks, and bike lanes to figure out how to safely incorporate these devices before even more e-bikes start hitting the streets- legally.