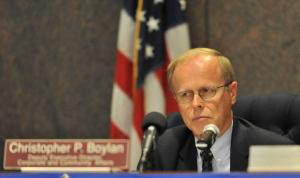 At a public hearing in Smithtown on the MTA’s proposed fare and toll hikes, a sparse but vocal crowd of commuters and public officials assailed the elimination of some train service to Greenport and criticized the authority’s unpopular tax on payrolls.

The MTA says it needs to raise Long Island Rail Road fares and tolls on bridges to cover a budget deficit.

But Mark Epstein, a Suffolk representative on the LIRR Commuter’s Council, said increases in the price of onboard ticket purchases and other proposed hikes are unfair to commuters.

“We are being taken on an expensive one-way ride with no end in sight,” Epstein said.

County Executive Steve Levy and other speakers complained that the payroll tax is burdensome to Suffolk residents, many of whom they said never use the MTA.

Michael White, executive director of the Long Island Regional Planning Council, referred to it as “taxation without transportation.”

Only 13 people, five of them public officials, commented during the public hearing last night at the Suffolk County Legislature building.

Epstein said he had complained about the public hearing’s location to MTA officials, who declined to relocate the meeting.

The Legislature building is too far from the nearest LIRR stops, Epstein said.

“It needs to be near a train station,” said Epstein, a Manhattan attorney. “How are commuters going to get here? It’s too far.”

MTA spokesman Sal Arena said Smithtown was chosen after criticism earlier this year when another MTA public meeting, on curtailed service to Greenport, was held in Riverhead.

“I think this was an effort to make it a little more centrally located in SuffolkCounty,” Arena said.